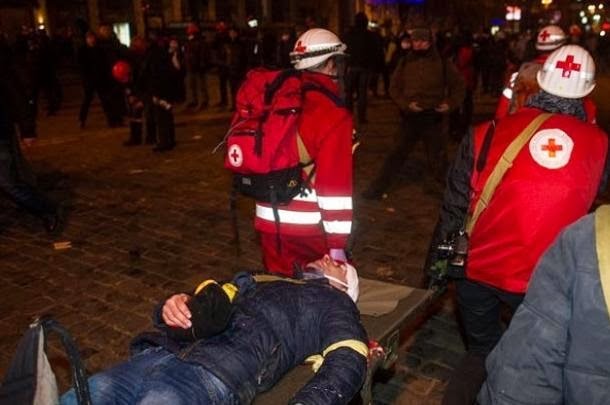 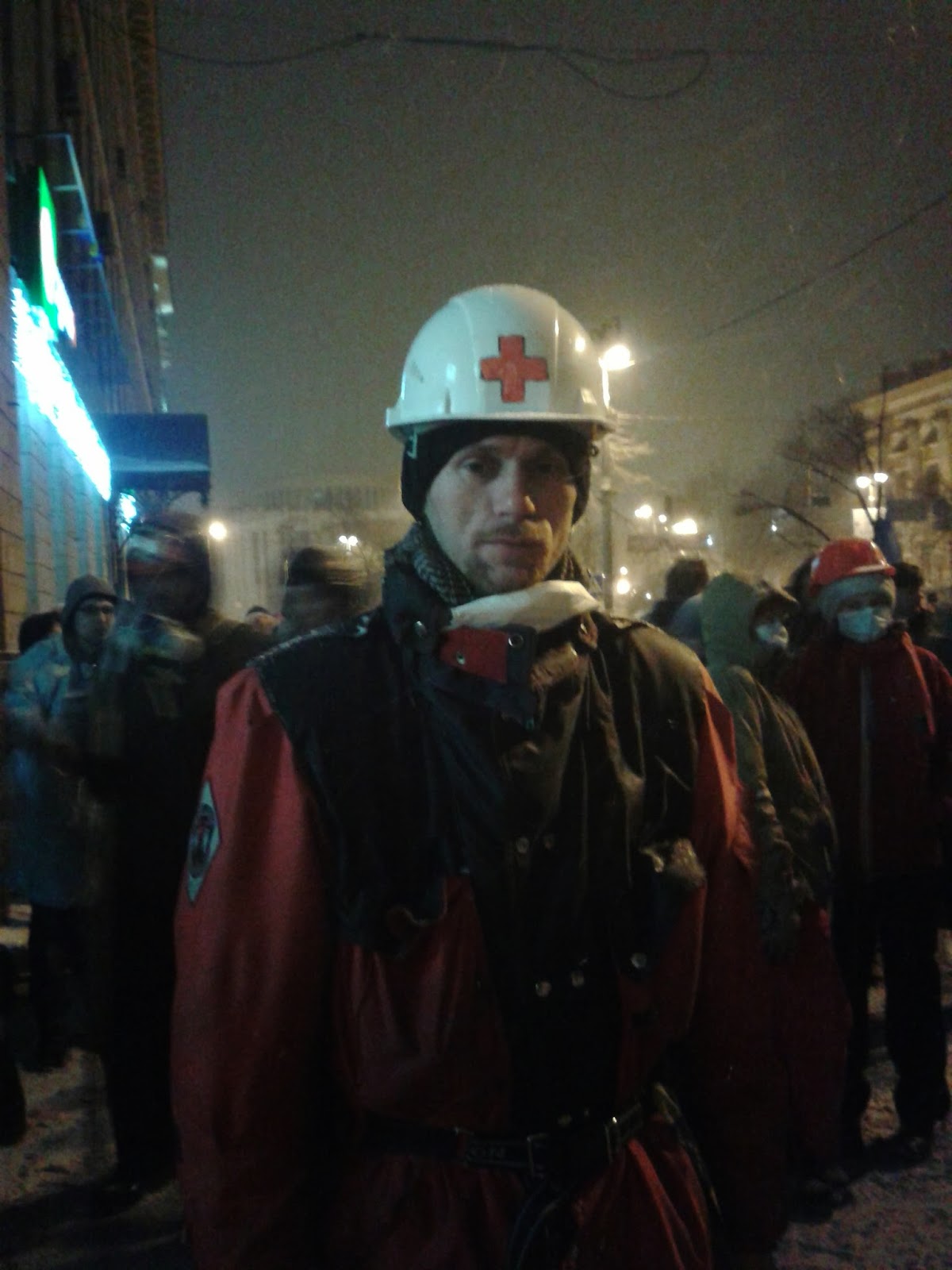 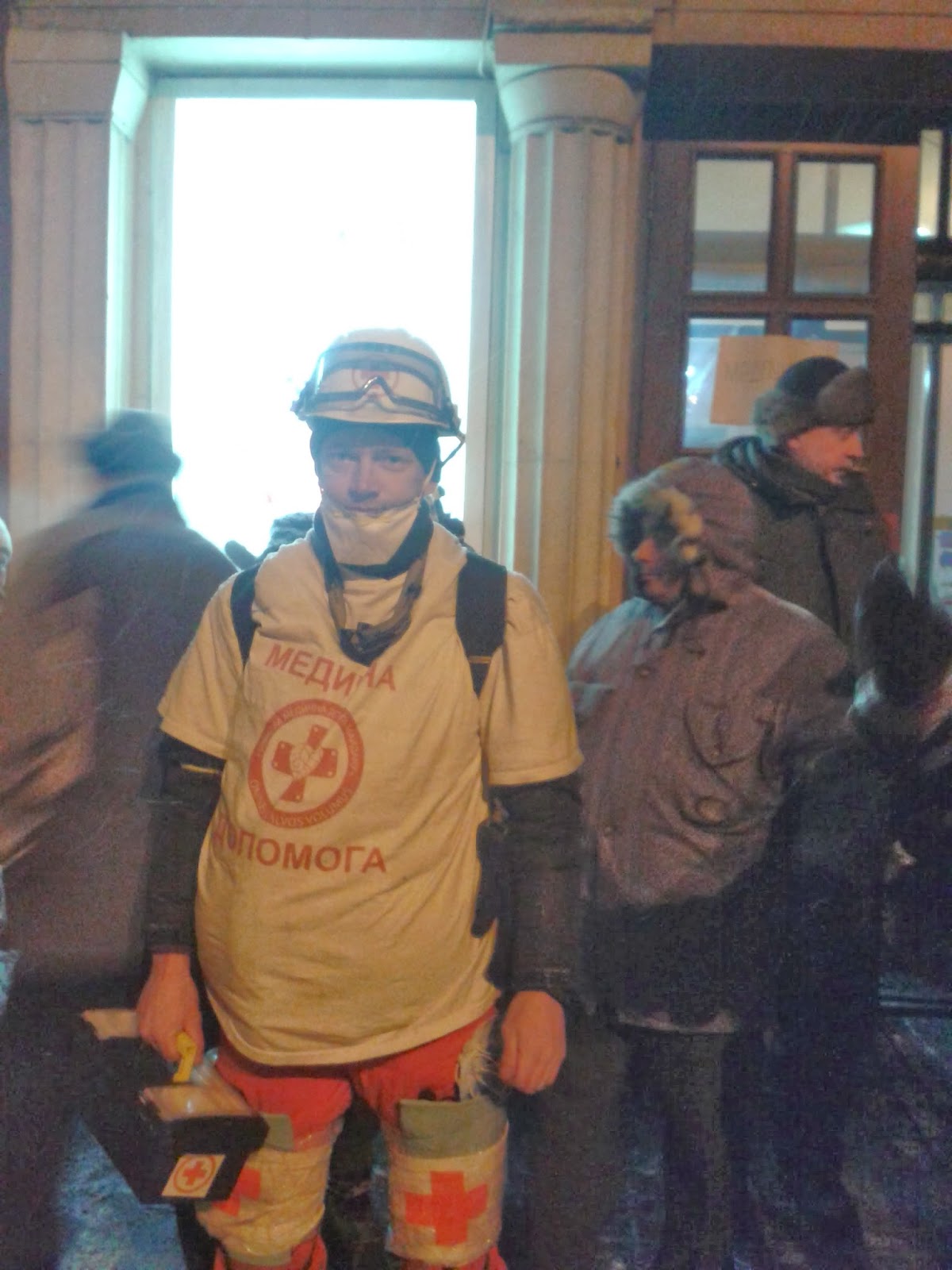 - What is the situation with wounded and dead people?
- This is a difficult situation, because the wounded refused to go to public health care hospitals. They refused public care hospitalization because the authorities are brutally interfering in the activities of the medical services by interrogating injured people who need to be cured. Moreover, unknown people are kidnapping the injured and wounded. So that is why medical service including surgical care has been deployed in the house of Trade Unions, in Kyiv's Rada, and in October Palace.

- About those killed?
- There have been four protestors killed as reported by our medical service. I think that this number could be higher. There is a medical center which was located outside Hrushevskogo and provided medical care.  Two people killed by gunshot wounds were brought there about 6 and 8 AM. One was wounded in his neck and chest and another was shot directly in the heart. The first one has already been identified, the second not yet. State forensic experts and militia came and took their bodies to the forensic station to do an autopsy. Just an hour later an attack began on the medical aid station on Hrushevskogo Street. Thank God, the doctors had time to leave the station. It happened at a time when our mobile medical teams were bringing two heavily wounded gunshot victims to the medical station, who look like they’re dead. Unfortunately, medical volunteers had to leave those wounded to save their own lives. The wounded were unconscious and they were left on the Berkut occupied battlefield. Some Ustreams showed how militiamen dragged the unconscious bodies to their side...

- Are there any wounded medical volunteers?
- Today only one with a concussion from a stun grenade. Today, we don't have medical volunteers with bullet wounds. But yesterday and the day before yesterday we had three doctors wounded by rubber bullets. Also we have the very terrible case of a medical volunteer who was wearing clothing with a big Red Cross on his back and providing medical care to the injured.  The "Berkut' made three gunshots into the Red Cross on the back of the volunteer. This event is a brutal violation of the Geneva Convention. Thank God, these were just rubber bullets ... Another doctor wearing a white helmet and in a T-shirt was shot in the nose. He had a broken nose and huge hematoma around the eyes.
In another case, a medical volunteer tried to provide medical aid to an injured militiaman who lay writhing in pain. When the volunteer went from the barricade to the militiaman there was no one for 20 meters around. Yet, even so, in flew two grenades.
The first grenade grenade exploded at his feet and wounded them. And the second blew up and damaged his face and hands. That 's for just trying to give help. These events are about doctors, who were directly from our medical service and suffered from Berkut's attacks. 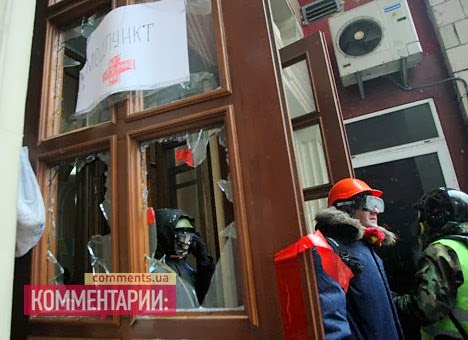 
Jan 22. 'Dzerkalo Tyzhnya' reported:
Militia 'Berkut' overran a clinic on January, 22 during their second attack. The clinic was organized by physicians on Hrushevskogo Street to give medical help for victims during street confrontations.  The 'Berkut' broke windows and threw inside stun grenades. According to eyewitnesses, Militia 'Berkut' took the Red Cross flag with them saying that it is their trophy. 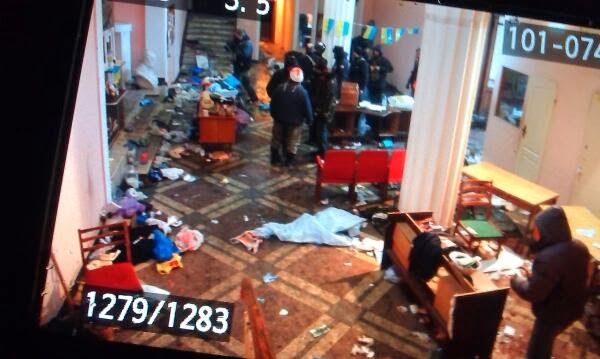 An eyewitness to the event said:
'When they broke in I could not understand what was happening. I just heard explosions, saw gas, and then they yelled and came in...'
0:34 video of 5 TV channel

Vice-President of the All-Ukrainian Council for Patients’ Rights and Safety, Evgen Najshetetyk, stated: “In the last couple days we’ve received information about more than 20 people that work for the Red Cross being beaten up”. He says the medical workers were beaten up by Berkut [riot police]. He also notes medical volunteers are always under attacks using traumatic and gas weapons. “Now they have to work in body armor and shields. Different sources talk about more than 500 qualified medical workers helping out in medical volunteer squads and in the Maidan medical service. More than one third of them reported different injuries received from the security forces” – summed up the representative of the charity organization. We remind you that yesterday All-Ukrainian Union’s “Svoboda” press service announced that special service “Berkut” fighters destroyed a medical post of protesters on the first floor of the National Academy of Sciences on Hrushevskoho St in Kyiv. Six fighters walked into the Red Cross building where there were medical workers and wounded people, and started to break windows, throw stun grenades and use tear gas. http://euromaidan.rbc.ua/ukr/v-rezultate-stolknoveniy-na-grushevskogo-postradali-bolee-23012014103300


Journalist Volodymir Tyshchenko posted a video on Youtube just after this attack.


“Medical workers had to escape, leaving all their medicine and drugs behind. When a Berkut agent walked into the building he shot one of the volunteers who was trying to help one of the patients out. The Berkut agent fired in spite of the fact that the medical volunteer wore a red vest with the Red Cross symbol and he showed his ID. The injured volunteer told us he was shot on purpose: “At the beginning he was aiming at my face, however, he lowered his weapon and shot my leg. Of course, later on they can say it was an accident. But he was looking into my eyes. It was done on purpose”. The medical volunteer commented that Berkut doesn’t care about the humanitarian and protective mission of the Red Cross and consider everyone criminals – medical workers, journalists, and ordinary people”, – wrote Tyshchenko. Now the medical workers are forced to give first aid in the Trade Union house, which is several hundred meters away from the battleground. 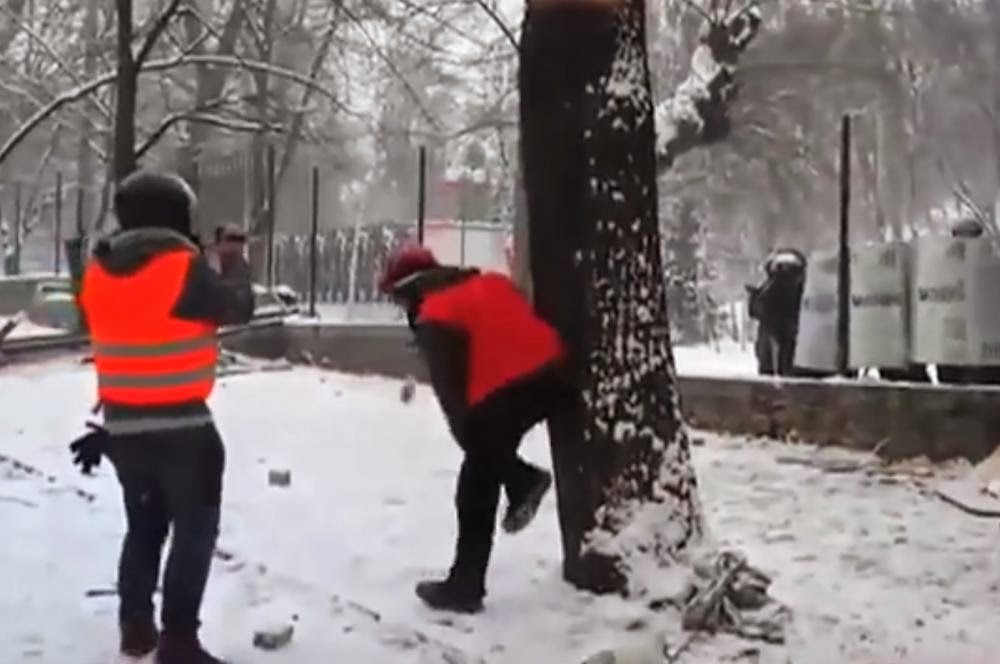 This is a video of UkrStream.TV where can be seen a 'Berkut' fighter was aiming and shooting at a Red Cross volunteer during the confrontation on Hrushevskogo. The doctor repeatedly shouted about his status and showed his documents but militiaman raised his shotgun and shot the medic's leg.

Photographer of LB made these photos. We can see as militiaman 'Berkut' aims at the medic (his name Alexey Tutov and he was detained and jailed after the event) in these photos. He really did not shoot because militiaman was distracted by another activist, who at that time threw stone at him. The militiaman ran after the activist, leaving the physician on his knees. 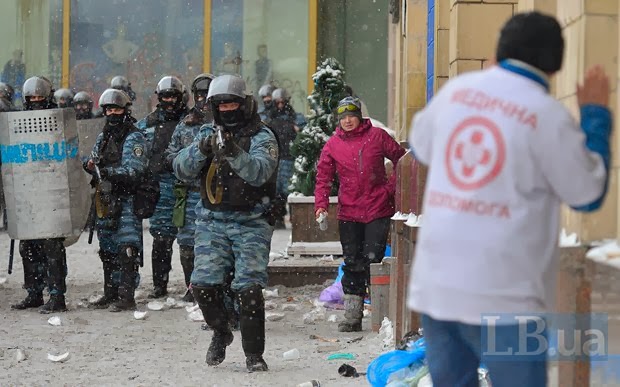 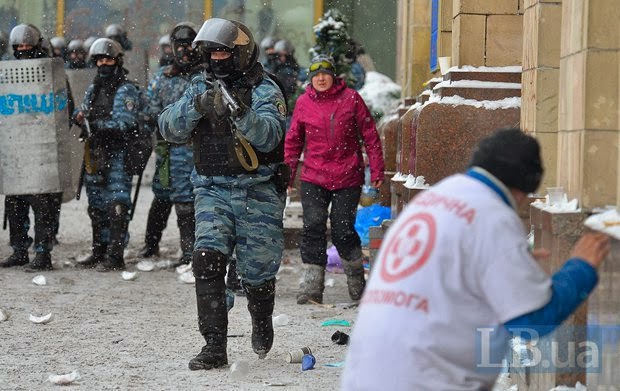 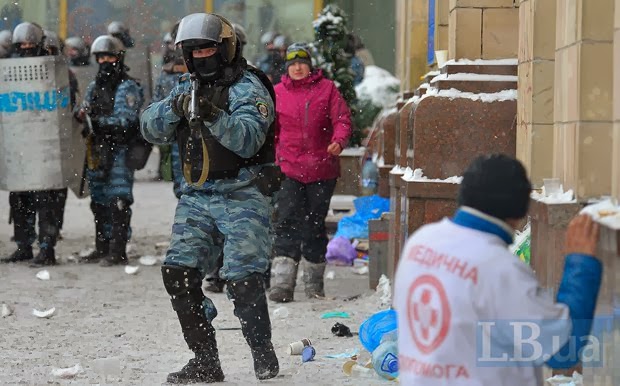 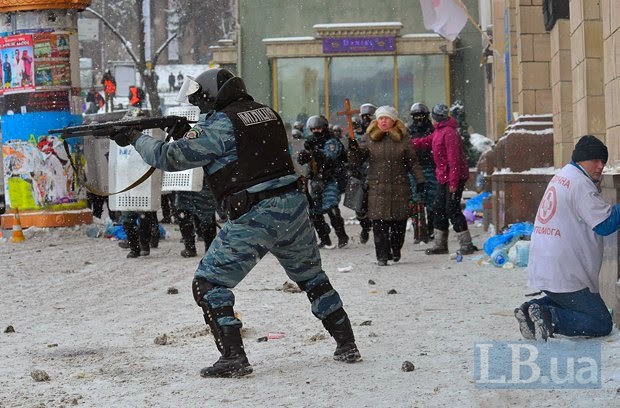 RT TV channel recorded this event of Alexey Tutov 's detention from another point of view:
1:05 - 1:54

Coordinator Euromaidan Medical Service Team Dr of Medicine Olga Bohomolets said:
- It was the general practice that experienced doctors did not risk getting shot by bullets because doctors were inside sewing up wounds. But the volunteers, who just have special training, are the people who are coming under fire and risking their lives by pulling out the wounded.

A Crimean inhabitant of Kerch Aleksiy Tutov became the first physician who was taken prisoner by militiamen 'Berkut'. The 26 -year-old volunteer endured injuries while providing medical assistance to victims during the clashes on January, 22. He risked his life by coming under fire from bullets, explosions and rocks.
Here's an exclusive video filmed by TV team "Znak Oklyku". Militiamen 'Berkut' captured and led to their side Aleksiy Tutov after their morning attack. The T-shirt with a red cross that Aleksiy wore was evidently ignored by militia. Along the way they beat him. This video is irrefutable proof that the man is a volunteer for a medical team and not a member of the riots.
4:08 - 4:30 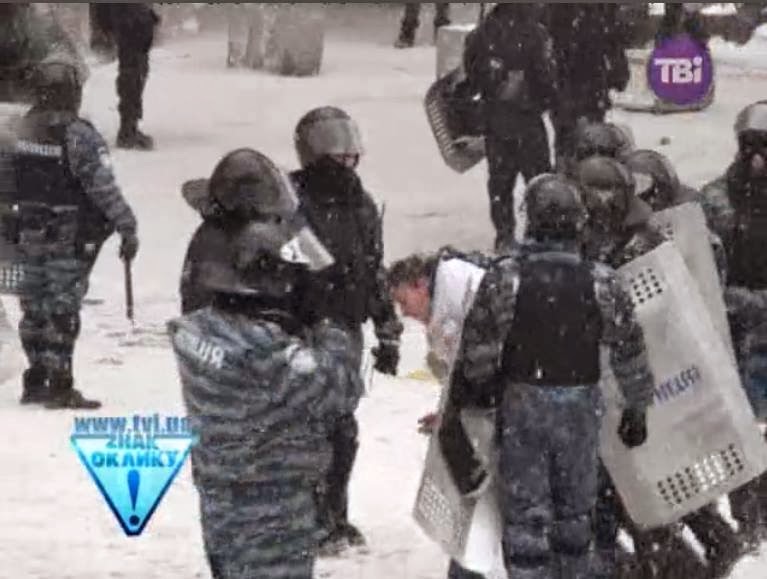 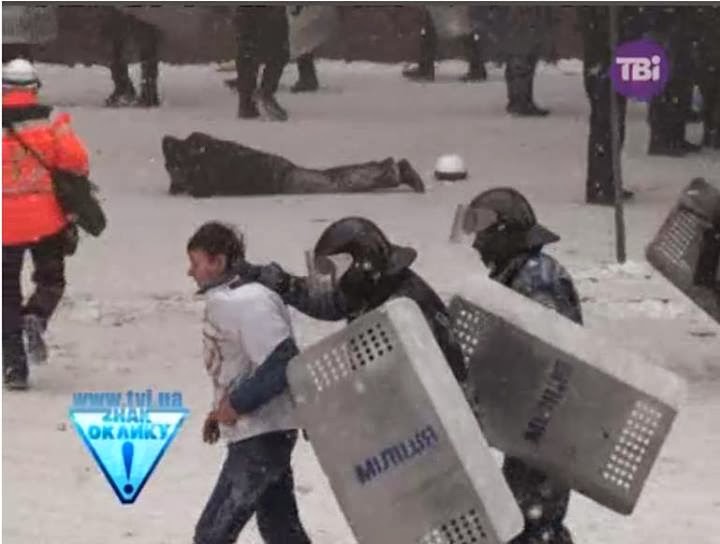 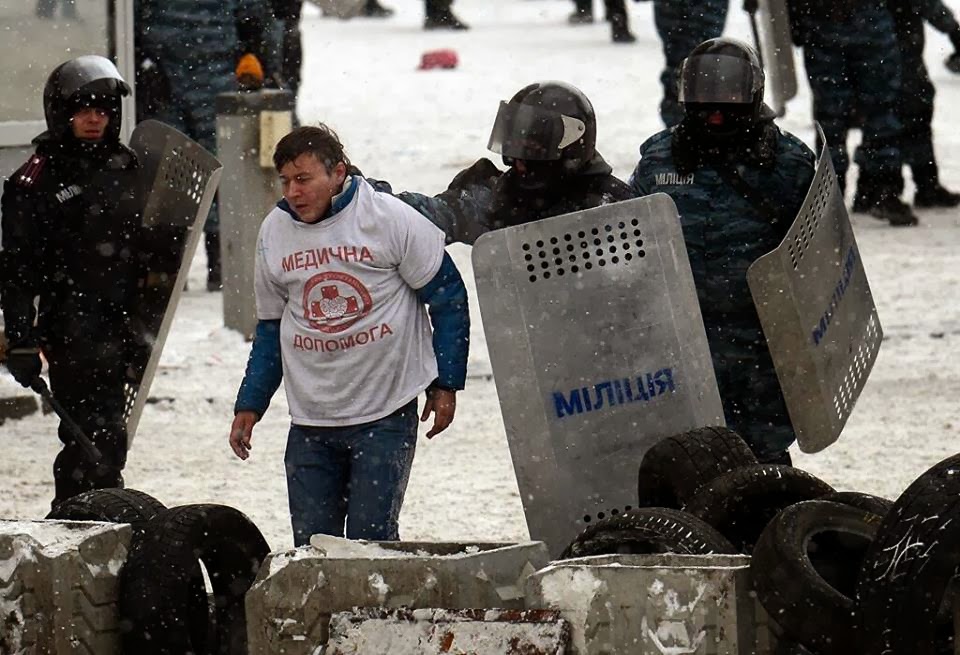 Coordinator of Euromaidan Medical Service Team Oleh Musiy said:
- In fact, there is not only video but also a number of documents that Aleksiy Tutov was detained while part of a medical outfit. I personally testify in front of cameras that he is a volunteer of the medical service, and he worked, and he was directly near barricades as a volunteer of medical service on January 22.

Medical Team Service of National Resistance demands on immediate release from jail of Aleksiy Tutov and objects to the persecution of volunteers who were providing medical care on Hrushevskogo Street.

The Kyiv Court of Appeals was considering a complaint by volunteer medical mobile teams, who in contrary to international law and Geneva Convention were detained by militia 'Berkut' while providing medical care to victims at the barricades. During the trial filming was banned by Court. Aleksiy Tutov by Court's of First Instance decision was sentenced to two months in jail as a preventative measure. The Appeal Court dismissed him from custody and put him under home arrest.
Natalie Lisnevska, who is a lawyer for the volunteer, said:
- He was released to home arrest, during which he’s supposed to stay in Kerch. This is partial home arrest: From 19:00 to the morning he is required to be at home, the other times he can work.

TV team "Znak Oklyku" met with the physician-prisoner under the walls of Lukianivka jail.
Aleksiy Tutov said:
- I was brought to jail. I've been here since the 24th. And today I went out into the air of freedom. I was released on home arrest. I have to return to Kerch.
Alex recalls how he fell into the hands of 'Berkut'. He says militiamen intentionally hunt doctors because only the blind could not see his white shirt with a red cross.
- One militiamen said to another: grab him... They led me to the police van, tore off my T-shirt with Red Cross. And then started to beat me like an old carpet ... They took all my things and smashed my phone.
- They knew that you are a medic volunteer?
- Naturally. I was in a white shirt with a Red Cross and 'medical care' label on it. They just tore off the T-shirt and left only a white collar on my neck.
Alex says: Lukyanivka, Kyiv's notorious prison, is packed with Euromaidan activists like herring in a jar. But all of them are scattered to different cells and kept separated.

Alex returned to his hometown for two months with his numerous bruises and chemical burns. Then he will again stand before the Court. Aleksiy Tutov needs to prove to people in black robes that he is a medical volunteer and not an extremist. Will it see the blind and deaf Ukrainian Themis?